by admin
in Binh Duong Vietnam
0
0

A war zone is a military base in the south of  the South East  of the  Front Vietnamese Minh City  and  Vietnam People’s Armed Forces  in  Indochina War  and the  National Front for Liberation of South Vietnam  and the  Liberation Army Southern Vietnam  during  the Vietnam War . The war zone was established in February 1946, including 5  communes : Tan Hoa, My Loc, Tan Tich, Thuong Lang, Lac An (now belonging to Tan Uyen town, Binh Duong province  ).

The circumstances of birth and the meaning of the name
The noun “Chien Khu D” denotes the region that was born at the end of February 1946. When the French colonialists occupied Tan Uyen district capital, the branch was established. The headquarters of Zone 7 and the armed forces of Bien Hoa and Thu Dau Mot retreated into the forest. The construction of the base was urgently laid out at the Extraordinary Conference of the 7th Division in Lac An. Approved by the conference, the construction of the base was implemented systematically, agencies, units, workshops … divided and closed each area. Each area has many plans to move locations to avoid French raids and bear the codenames A, B, C, D (A is the communication base located in Giap Lac, B is the logistics base. stationed in Thuong Lang, C is the permanent army unit stationed at Ong Doi, D is the headquarters area of ​​zone 7 located in Ngai Hoang pit).
Since then, war zone D became the base of war zone 7 – an administrative – military organization of the provinces of Thu Dau Mot, Bien Hoa, Tay Ninh, Gia Dinh, Cho Lon, Ba Ria and Saigon city. , by Lieutenant General Nguyen Binh was appointed Zone Chief and Tran Xuan Do as regional politician. Initially, D was the codename indicating the headquarters of zone 7 in the system of the base locations of the zone. Gradually, the codename D was used to refer to the vast war zone that was increasingly developed in the Southeast.
However, there are many people who think that the letter D here means “red”, implying that the resilient revolutionary war zone, gathering important resistance headquarters, a “red address” of the whole country. Or the letter D stands for Dat Cuoc, where the soldiers Huynh Van Nghe first started, gathering forces. Or the letter D stands for Dong Nai war zone, Eastern war zone, First war zone … 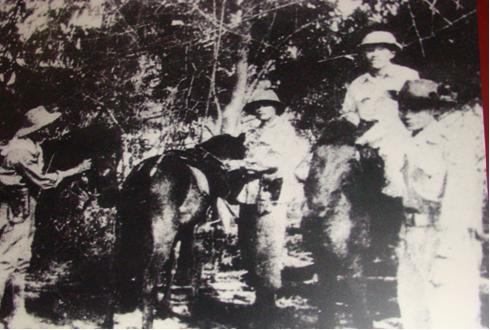 Range
The nine-year anti-French period, Chien Khu D was formed in February 1946, mainly from the nucleus of 5 communes: Tan Hoa, My Loc, Tan Tich, Thuong Lang, Lac An in Tan Uyen district, Bien Hoa province. – Now belongs to Binh Duong province. From 1948, onwards, the War Zone D was expanded and developed to the North and Northeast. However, its scope is mainly on the land: the West borders on the road 16, from Tan Uyen town to the Green Gate; the North borders Be River, the section from Phuoc Hoa Bridge to Chanh Hung, the East still borders Song Be, the section from Chanh Hung to Hieu Liem junction and the South borders on Dong Nai river, from Hieu Liem junction to Tan Uyen town.
In the anti-American period, due to the scale of the war, from the old war zone (mainly located in Tan Uyen), the base of the base gradually moved to the northeast. By early 1975, the base was completely built, the scope developed to the highest level. The whole base is located in the north of Dong Nai river, the west is bordered by the two former Binh Long and Phuoc Long provinces, the North borders the Vietnam-Cambodia border and the east is bordered with three provinces of Binh Duong. At present, Binh Phuoc and Dak Lak are drawn to Cat Tien forest upstream of Dong Nai river on the right bank.
Characteristics, role
Located in the system of forests in the North East, the Southeast and the dangerous terrain, Chien Khu D is an ideal area for building bases, hiding forces, storing treasures and developing all aspects of a resistance base. With the back leaning against the Truong Son and the mountainous southern region of Indochina, attached to a part of the end of Ho Chi Minh Road, the front encroaching on the densely populated plains and major urban areas, the battle zone D is still a location strategic project, connecting many battlefields together, is one of the important points of communication, connection, transit from the North to the South. Moreover, with the advantage of accessing strategic roads, major cities and the center of enemy hideout – Saigon city, the war zone D has the advantage of being a military stepping stone to attack military targets. , politic,
Chiến khu Đ được coi là trung tâm kháng chiến, là nơi ra đời và phát triển của các lực lượng vũ trang miền Đông Nam Bộ như tiểu đoàn 800, trung đoàn 762, sư đoàn 9, sư đoàn 5… Trong cuộc tổng tiến công và nổi dậy xuân 1975, là nơi tập kết của lực lượng quân đoàn 1, quân đoàn 4 trước khi tiến về giải phóng Sài Gòn. Tên Chiến khu Đ gắn liền với những chiến thắng vang dội trong lịch sử chống ngoại xâm của quân và dân Miền Đông Nam Bộ (thắng Lạc An, Tân Uyên, chiến thắng Phước Thành, Đất Cuốc, Đồng Xoài, Phước Long…). Sự tồn tại và phát triển của nó đã góp phần vào thắng lợi chung của hai cuộc kháng chiến chống thực dân Pháp và đế quốc Mỹ xâm lược.
In terms of politics and spirit, the War Zone D exists as a symbol of the resistance war, representing the will and spiritual strength of the entire people, a source of hope and beliefs of all cadres. soldiers and people in the Southeast region.
Now, the former War Zone D is a vibrant land of riverside rice fields, sprawling rubber farms, immense forestry farms, hydroelectric plants and plants. Tens of thousands of people from all parts of the country have come here to build new economic centers. The vestiges of a resistance base that existed for nearly a third of a century is fading in the face of great changes in new life. However, the war zone D with its historical content and lessons learned is not lost, but remains forever.
The war zone D memorial area with an area of ​​more than 30ha will be built on heroic Tan Uyen land, which will record the resounding victories of the epic War Zone in the past.
Rate this post