by admin
in Binh Duong Vietnam
0
0
At present, Thu Dau Mot market is located on a relatively flat position, close to the Saigon River and the roads surrounding the market; The North borders Nguyen Thai Hoc street, the South borders Bach Dang street, the West borders on Doan Tran Nghiep Street, the East borders on Tran Hung Dao street. Market is the center with a quite convenient location for exchange and trade.
Phu Cuong – the origin name of Thu Dau Mot market
Thu Dau Mot market, at its inception, was called Phu Cuong market. According to local history, the land of Phu Cuong until the beginning of the seventeenth century was still wasteland, the landscape here was dense forests. In particular, the outstanding image is that the old Dau forests in the current Chanh Nghia area, especially the riverside area at that time were just marshy areas, flooded gradually formed by the alluvium of the Saigon River. South of Phu Cuong with tiled roofs in green foliage. The small canal was covered with sailing boats, the market was placed in the first canal.
When Nguyen Huu Kinh entered the Gia Dinh land in 1698. The area of ​​Phu Cuong today, residents converged somewhat later than Lai Thieu and Thi Tinh but concentrated more quickly and crowdedly due to the location forming the seat. of Binh Dien district, Binh An district, Bien Hoa province at that time.
The place Phu Cuong appeared around 1838 (The 18th Minh Menh Dynasty) along with the change of many village and village names in Binh An district. Therefore, the name Phu Cuong market can also be embryo during this period. Phu Cuong market, historically formed later than some markets of Binh An district such as Tan Hoa market, Thi Tinh market, Binh Nham Thuong market.
The section “Thi Diem” (Cho Quan) of Dai Nam Nhat Thong Chi book – a set of geographic books compiled in the period from 1864 to 1875, mentioned the name of Phu Cuong market: ” Phu Cuong market in Phu Cuong village, Binh An district is known as Thu Dau Miet market (or Dau Mot) in the district capital, crowded cars and boats ”. In 1889, in Binh An district, Thu Dau Mot province was established, Phu Cuong market became a market in Thu Dau Mot province. Since then, the name of Thu or Thu Dau Mot market has been mentioned a lot in folk and also in poetry and literature.
“ In the afternoon, I borrowed a horse from Mr. Do
Borrow three soldiers to take my aunt home
Bring to Thu market to sell tofu to sell.
Selling tea set, selling mortar to stab pepper … “
Before the French invaded Thu Dau Mot outpost in 1861, Phu Cuong market was a busy trading place, many vehicles and boats gathered to exchange and trade goods. 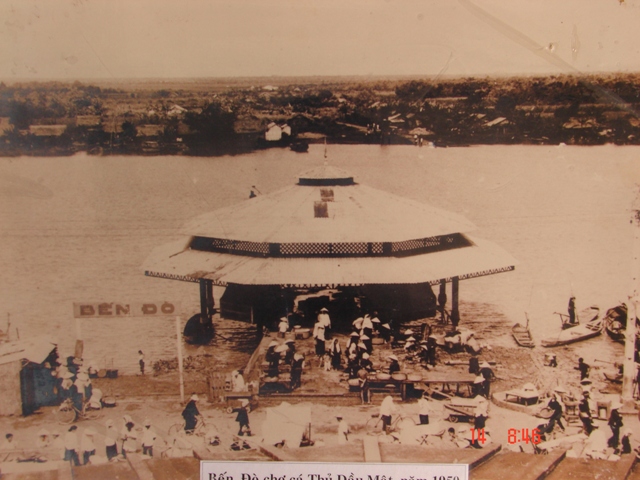 Thu Dau Mot Market – French architecture is heavy on European motifs
After the French occupied Cochinchina. In which, there is Bien Hoa province (Binh An district, Bien Hoa province), the French have restored and completely transformed Phu Cuong market with stone paved gate and inside high road. According to the “Binh Duong locality” written in 1888, the French authorities filled the Phu Cuong canal that was connected to the Saigon River and completed this work in 1890.
By 1935, the French realized that the investment in the market was of great benefit, they restored and completely transformed the Phu Cuong market to imitate the old markets in France with a structure similar to Nam Vang market. Cambodia) and Ben Thanh Market (Saigon). The special feature of the above model is that they still respect and keep the same position. In 1938, Thu market was inaugurated with a new model, generous and elegant architecture, at that time and had advantages over many other places. The market is divided into seven large and small areas and is built in a rectangular style consisting of three separate houses. From Tran Hung Dao street in, we found a house with one floor and one ground floor also called (Thuong Xa area) built and divided into small subdivisions of folk still called “market stall” to display for sale of goods. Behind the Thuong Xa area is the horizontal house (dining area), built between the Thuong Xa and the Clock area, arranged into three main rooms for dining. Behind is the long house – the house of the market row (or the Dong Ho market) is also built and decorated in each small subdivision, even at the foot of the Clock Tower market.
The market house is the first house built by the French colonialists in 1935, with a ship-shaped architecture, with the top of the tower being a clock heavy on European motifs, designed by Mr. Bonnemain, a French architect and inaugurated in 1938. The series of houses was built according to the long-house architecture, with an area of ​​2,590m 2 , with two roofs divided into two floors, the height from the base to the top was 10.3m. House plays a very important role in the formation and development of Thu market.
Clock Tower market is built in the hexagon style attached to the market row house, with a height of 23.72m, including four floors. The ground floor, from floor to ceiling, has a height of 6.5m, poured with concrete, reinforced concrete, with a staircase made of iron and mounted in the inside of the tower. Besides paving stone and tile grafting on the east and west sides of the tower. From the second floor up, the tower was covered with a high road inside into eight pillars on the hexagonal sides.
The tower is built in a three-tiered fashion, the higher it gets, the narrower. Up to the third floor, the tower is poured with concrete knitting panels and built about one meter high to serve as the foundation for the clock face, which is also the place to attach the Clock. On the background of the watch face made of white background, the numbers are blue and the hands are painted black. The watch is poured with four concrete knitting plates mounted above the clock to shield the sun and rain. On the top of the tower are mounted 4 clocks.
The image of the Clock market tower is the heartbeat and a symbol that has experienced many prosperous times in the history of formation and development of this land.
Thu Dau Mot Market has always held its position as a typical commercial center of Binh Duong, and at the same time witnessed many important historical events in the struggle for national liberation. That is why, Binh Duong market is not only a place to buy and sell, but also a cultural symbol associated with the development history of Binh Duong and the South.
Rate this post