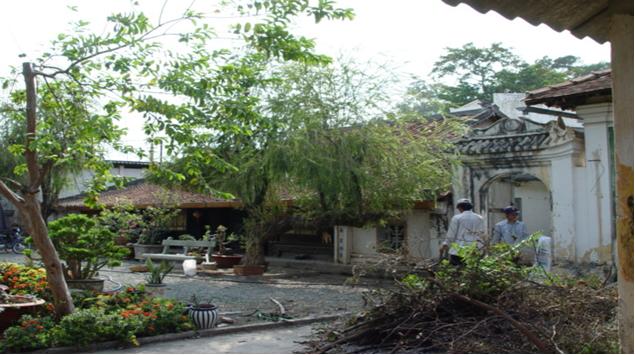 Overview of the house of golden dentist Tran Cong
The house faces to the south, with its back against the hill (where the Provincial People’s Committee is now headquartered), this is also a favorable position, according to the ancient feng shui. In terms of the geographical location of the house of the golden old man as well as two more old houses of the Tran family in Phu Cuong ward are located near the Saigon River, which is very convenient for transporting timber trees from the forest. It is known that Vang’s paternal ancestor used to work in the forest, had a sawmill, saw timber.
Architecture and decorative arts
Construction works are in reverse nail type architecture, that is, the horizontal house is on the left side of the upper house, instead of on the right. This is a nail-shaped house with improvement, with a sub-yard separating the upper and lower house, the communication between the two parts by a small toilet that cuts the sub-yard in half to make two parts of the lower house door protrude at the top of the yard. Without being protruded at the gable, this door is also constructed in a special way, looking like some of the Chinese temple gates, but the owner says it is in the style of Indian temples.
Like many other houses, the house of Old Vang has a frame made in the style of the house, but there are 8 punches and 8 decisions in two wings. The apparatus, the blade, the mortar are skillfully trimmed, finished with the edge, the trusses are meticulously and meticulously carved, the leaves are straight in the third row. The whole house above counted 48 round pillars, all of them standing far away from the wall. 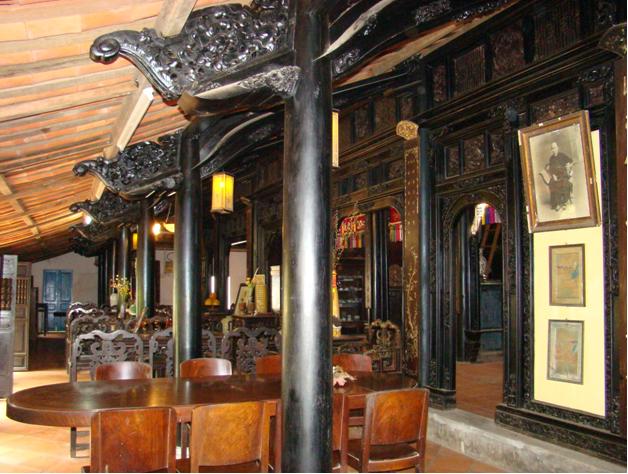 Reception space
The interior decoration part of the house is the part that makes visitors most interested, that is the elaborate carvings, from the foot of the pillar to the roof, tables and chairs, the church of the door frames … , for, the four-square pictures, the hand-book plates … all are carved and painted with elaborate and skillful mother-of-pearl, making the house magnificent but solemn. In general, the engraved motifs here are often conventional, symbolic, which express the desire for a peaceful, happy life, and a humane and moral life … The lines emphasize the flexible, soft.
The carvings include plants, flowers, birds, animals, objects, geometric lines. Particularly, the manuscript hanging on the right altar from the inside looks out to touch the pictures of Tung Loc and Ma Duong, accompanied by two verses of Chinese characters, creating a serene, elegant and decadent look.
Layout of the house, First of all is the upper house, the house has 5 compartments with two lean-tos, the worshiping section, the reception, the rooms for living and storing the possessions are separated. The part of worship occupies three rooms based on the principle of the left space to worship the parents of the owner, the right to worship the grandparents, the middle altar to worship the higher grandparents is called the family family. Each altar consists of a mother-of-pearl worshiping cupboard, the top is the quintet, the inside is a tablet or portrait of the deceased, close to the silk wall is the altar, the top is a motto, the opposite sentence, the top of the altar has Mi touch “Two Dragon Painting Chau” and the handbook. The two compartments on the two sides are the master bedroom of the couple, behind the altar wall is a row of furniture storage … On the altars are the altars with the tablets, mandarins of the emperor, the earthquake, Dong Tru, private destiny, holy spirit, god of wealth. 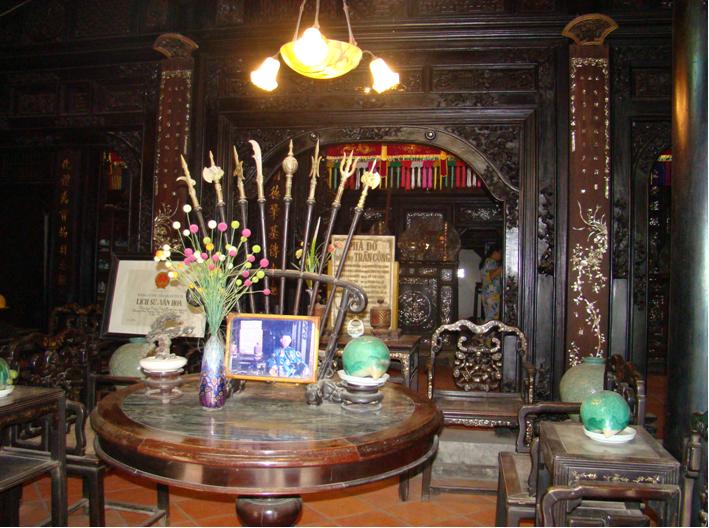 Large round table receiving guests in the middle
The reception section consists of two basins (from the second column to the fourth row), where tables and chairs are placed to receive guests, including in the middle of a large round table, a marble-lined table top. , on the shelf of Bat Buu (eight ancient weapons), there are chairs around the table with sophisticated carvings and symbolic meanings. The two sides of the round table were rectangular tables shaped in the style of comfortable chairs. In the first compartment are two tablesa mango box, a modern chair around, all tables and chairs are made of wood. Along the partition between the reception and the worship section, there are small square tables on top with porcelain fruit plates, where the owner also places a Diagram showing the general status of the people of them. There are also tables at both ends of the house, on the left side of the altar for the owner ‘s photo, with a couple on both sides, a set of small quadrangular pictures, matching pairs and quadrangular pictures. In particular, the front of the bedroom is placed with a glass cabinet, inside there are many precious items such as antique coins, sports hats, bride’s clothes when returning to her husband’s house, in the old style …
The house’s feature is that there is an inner corridor running around the worship section, between two partitions, this corridor helps the connection between the guesthouse and the bedrooms, without having to go through the worship part.
The lower house is a horizontal house, built in the radial way but simpler than the upstairs house. The horizontal house is used to receive normal guests, is the place for family activities, the cafeteria, the kitchen, … in front of the horizontal house is the garage facing the gate. The front yard is planted with many pots of ornamental flowers, ornamental plants … enhancing the ancient beauty of the house.
The Chinese character culture shows the concept of life of the ancients
The Chinese culture part of the house plays the role of decoration and at the same time expresses the concept of life of the ancients, that is the pairs of matching Chinese characters. Gold’s house has more than 13 pairs of pairs and essays, typically:
At the entrance to the gate we read the pair with content like please feel free to:

The first mind, like the market as the market
Neutral disbelief, private private words.
Temporarily translated :
First of all should be mindful, in like that, out as well.
Always stay in the middle, not rely on, say that and do that.

The pair at the left gable shows how to live with a mind at it:

Handling the pride
Cultivate the body of the family
Temporarily translated:
Do not be arrogant in communication.
In cultivation, you must be serious about yourself.

On the right gable with a pair of objects that highlight filial piety and learning:

In the second column with cursive letters to recommend inheriting the teachings and good living rules of the ancients:

The first human mail saved the language of heaven and earth
For the great post-diaspora, the ancestor of Duc Tong Cong
Temporarily translated :
Reading books of the ancient people, that ethics of the subjects passed on.
Because of the next life that makes the pattern, it is the grace of the ancestors.

At the house of Old Vang, there are two poems or two quizzes written at the altar, one of them:

Organic parents try to name the non-verbal body.
Heavenly mandate, pedagogy, dignity and honor.
Cu Lao Chi Duc, sex and education, Hai Son private newspaper, security insecurity.
Carpentry sex still clown, non-stop pediatric room.
Sexual care clown, child immortal body.
Usually turns out to be a rare bean curd.
God infinitely enjoy, enjoy vu carving into.
Tue at Nham Thin spread tectonic.
Temporarily translated:
Having parents should have my body, my name is not self-contained.
Heaven and earth are rich in shape, when they are young, they are taught, they grow up to be glorified, industrious, sexually indulgent, to repay the grace of heaven and the sea, sleep restless nights.
The tree wants to be still but the wind does not stop, I want to repay the parents that are no longer alive.
The precious offering in purity.
God does not enjoy the normal way of life, donation is mainly in the heart.

The Golden-old house has both artistic – human nature and bold traditional culture of Vietnam; at the same time, it affirms that carving and carving techniques have had a long tradition in Binh Duong. Decorative artifacts and housewares are still abundant and mostly antiques. The entire architecture of the house and the objects inside, shows the living features of the rich family in the late nineteenth century and early twentieth century, demonstrating the development of the life of Vietnamese residents. in Binh Duong.
Rate this post