by admin
in Binh Duong Vietnam
0
0
Hoi Khanh Pagoda is located at the foot of a hill, 500m from the center of Thu Dau Mot town to the East, No. 35 Doctor Yersin Street, Phu Cuong Ward, Thu Dau Mot Town, is a religious architectural work. largest arts province, was recognized historical – cultural Country date 01.07.1993.
The pagoda was built in the eighteenth century (1741), 1861 the pagoda was burned by the French. To 1868, the temple was rebuilt in its current location with a building area of 1.211m 2 . N In 2007 the temple building tower 7 floor 27 meters and reconstruct ancient Buddhist “Four activists” include: Lumbini (where Buddha was born), Bodh Dai Trang (where Buddhist religious practices) , Deer Park (the first Buddhist doctrine), Ta La Song Tho (the Buddha entered nirvana) has a deep sense of dharma.
In 2008, a large-scale Buddha station with a height of 22m was built in the land in front of the pagoda. The ground floor is a row of houses with a length of 64m, a width of 23m, used as a Buddhist School, Library … The upper floor is decorated with the great statue of Buddha Thich Ca Immortal Nirvana, 12m high, 52m long. This is a proud work of art of Binh Duong Buddhism, solemnly inaugurated on the full moon day of the second month of the Tiger year (March 30, 2010) to celebrate 1,000 years of Thang Long – Hanoi.
Long-standing works of religious and artistic architecture
Although it has been repaired and restored many times, this is basically a rare temple that still retains most of its original architecture. The highlight of this ancient temple is its rich value in terms of cultural history, architectural arts, especially most of the relics and antiques that have been preserved for hundreds of years have been preserved up to now. Hoi Khanh is also considered a typical temple for the common features of ancient temples in Binh Duong Hoi Khanh pagoda
Regarding the structure of the pagoda, there are four main parts: Electricity charge – Main hall; This architectural lecture hall has 92 precious wooden columns; The Eastern lang and the Western lang of the pagoda are arranged in the style of “arranged in pairs”, connecting with each other with the architecture of “coincidentally on the same shelf, with the same salary”. This is a special variation in the architecture of the ancient pagoda tradition of Nam Ky. The main hall with trusses, wooden walls and three sets of curtain doors, there are also nearly 100 wooden statues, the Arhat and the Minh Vuong Cross with different looks made of gold-painted jackfruit wood. Especially, there are two reliefs carved with the figure of 18 Arhat and Bodhisattvas, creating a beautiful sculpture with high artistic value characteristic of ancient Binh Duong wooden sculpture style. This is a work bearing the imprint of the unique talented hands of the Thu parish worker class (TDM) at the end of the XIX century (including workers such as alum, road, Truong Van Cang, Nguyen Van Ba,
As for the tales of the story, poetry is still abundant and valuable that no pagoda can match. In the main hall, there are many good stories for the Zen teacher that many people mention:

“The downside of this is a debilitating structure in the image of the real estate
Thi does not visualize the moon through the sea to make mercury mercury “
(As real as spoiled, the ball sweeps the floor, the bare dust does not move.
Is not sharp, the moonlight is swirling the sea, the sea water is not stuffed)

In addition, many people also mentioned the sentence of the old vice-president Nguyen Sinh Sac, who remained at Hoi Khanh pagoda, with the connotation of the words of meditation: “ The great religion opens the eyes to the moon. Meditation of religious education, qui mao lizard first phong ” (Provisional translation: expanding the religion as large as rabbit horns like looking for a moon in the water bottom. Nurturing the roof of the temple like turtle hair like a wind column at the head of a tree).
As for the interior decoration art, the statue of the spirit of worship is very elaborately carved and engraved … especially the set of “La Han” (artifacts in 1921), the relief. The “four times” article is clipped to two columns in front of the main hall; Sophisticated carved altars were completed in Ất Ox (1925). The temple also retains the woodblocks printed with scriptures over 120 years ago
The general rose of the pagoda was cast in the year of Qui Mui (1883), consecrated by the deity Duong Van Lua. This shows that Buddhism developed quite early and quite strongly in this locality. 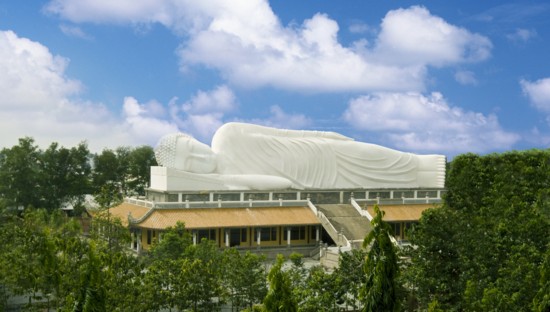 Newly built Buddha monument and the largest statue of Buddha Shakyamuni entered Nirvana in Vietnam
The bond between the French blade and the nation
Since its establishment up to now, the pagoda has undergone 10 abbot (9 passed away), many of which are famous monks and talented people in the South.
In the years 1923-1926, Hoi Khanh Thu Dau Mot pagoda was also a place of refuge gathering the dignitaries: Confucianists, patriotic monks together established the “Honorary Association” with the participation of monk Tu Van himself, Vice Chairman Nguyen Sinh Sac (Uncle Ho’s father), old lady Tu Cuc … The purpose of the Association is to promote a lifestyle that emphasizes morality, respects the honor and love for the people of the country. Although the guild was only active for a short period of time, it had caused considerable influence.
After the August Revolution in 1945, Hoi Khanh pagoda was the headquarters of the Buddhist Association for National Salvation in Thu Dau Mot province, and made a great contribution, including the blood and blood of the monks and Buddhists of the pagoda. During the resistance war against foreign invasion of the local people from 1953, the pagoda was the headquarters of patriotic Buddhism in Binh Duong province and in 1983, Hoi Khanh pagoda was the headquarters of the Buddhist Association of Binh Duong Province. In 1995, the Provincial Association built the Basic School of Buddhism in Song Be province (Binh Duong). At present, Venerable Thich Hue Thong is abbot of Hoi Khanh Pagoda (since 1988) and is the standing deputy of the Provincial Dharma Association of Binh Duong.
Rate this post