The book ” Gia Dinh Thanh Thong Chi ” wrote: “Chieu Thoi Mountain (Chau Thoi) each mountain is high and green, with good old trees, making a tidal screen to the Tran Thanh. The people of the mountains around, there is Hoi Son pagoda above which is the place where Zen monk Khanh Long created to practice, gazing down at the giants.
The book ” Dai Nam Nhat Thong Chi ” also quite clearly describes the mountain and Chau Thoi pagoda as above: “Chieu Thoi Mountain is customarily called Chau Thoi mountain, 21 miles south of Phuoc Chinh district, each mountain is high as a front. for the province. In the middle of Chieu Thoi mountain, there is Van Tinh am is the place where nun Luong stayed. Suddenly a tall, flat, wide mound, on the side with caves and water flowing around, the houses of the people around. Above, there is Hoi Son pagoda where Zen monk Khanh Long has a monk’s monk. In the year of Binh Than, Hoa Nghia, Ly Tai, occupied Chau Thoi, which means this place. The third year of Tu Duc (1850) brought this mountain to the dictionary “.
Chau Thoi mountain pagoda
Regarding the origin, there are grounds that the pagoda was built around 1612, by Zen master Khanh Long, on the way to travel the dharma to Chau Thoi hill to see a charming scene, he built a small herb to meditate and prepare. am called Hoi Son pagoda, later renamed Chau Thoi mountain pagoda ”. But there is also evidence that Chau Thoi mountain pagoda established in 1681 was the most reasonable time. But even though it was established in 1681, Chau Thoi mountain pagoda in Di An district is still the oldest temple in Binh Duong and was formed early in the South .
The stone temple gate at the foot of the mountain has the title of the pagoda in Chinese characters “Chau Thoi Son Tu”. Visitors walking up the 220 steps will reach the three-door gate with three curved roofs and a wheel of dharma located in the middle of the top, the two sides of the door have a few words “Compassion – Joyful …” 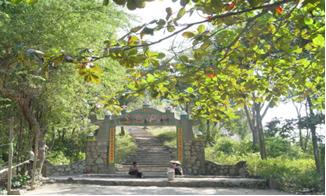 Over three hundred years of turbulent history, suffering from destruction and destruction of time and wars, Chau Thoi mountain pagoda now no longer retains traces, the original relic of an ancient pagoda was formed in rows. the earliest South Vietnam. Currently, the pagoda is a diverse architectural complex built at different times: including the main hall, the shrines of Thien Thu Thien Nhan, Linh Son Thanh Mau, Dieu Tri Kim Mau, Ngu Hanh Nuong Nuong and the palace. worship Ngoc Hoang God. Here also shows clearly the union between Buddhist beliefs and folk beliefs like the majority of Buddhist temples in our country.
The highlight of the pagoda’s architectural decoration is to use many pieces of colorful pottery mounted to form a dragon over a meter long placed at the top of the temple roof and there are 9 such dragon shapes facing many directions.
The main hall is designed: dedicating the upper part to worship Buddha Amitabha, Quan Am, The Chi; the next floor is dedicated to Buddha Shakyamuni; Downstairs is a place to worship Buddha Christmas. All bronze statues are cast at the pagoda, made by a group of professionals from Hue. The pagoda also worships the Arhat and the Diem Vuong crucifix in terracotta. These are two quite old and unique sets of statues that are still preserved, showing that the local pottery profession has developed quite early. The pagoda also preserves three ancient stone Buddha statues (possibly in the late seventeenth century) and a wooden Quan Am statue made of hundreds of years old jackfruit trees planted in the temple garden. 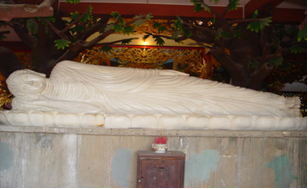 In 1988, the pagoda cast a common rose in the model of Thien Mu Pagoda (Hue) weighing 1.5 tons, 2 meters high, 1 m 2 in diameter , placed on a iron wooden bell rack carved by artisan Binh Duong. beautiful patterns. In the years 1996 – 1998, the pagoda organized the casting of seven more bronze Buddha statues, built a stupa consisting of many floors 24 meters high. In 2002, on the right of the pagoda, the construction of a ground floor and one floor was built and on the rooftop there was a stupa to worship Quan Am statue, 3 meters high and 3 tons in weight.
Up to now, the pagoda no longer preserves the full range of flavors and towers of the Zen masters, but only worshiped wooden carvings and some of the monks of the later generations. About the number of valuable antiques classified at Chau Thoi mountain pagoda today still retain 55 artifacts (ranked second in the temples in the province).
Rate this post