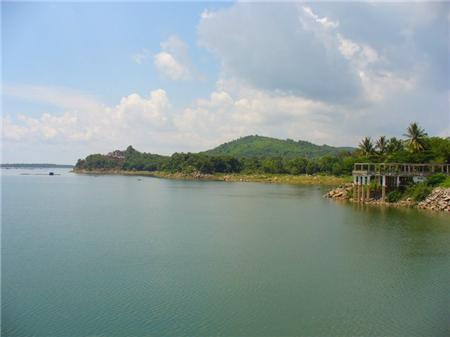 Nui Cau complex with a total area of ​​more than 1600 ha, including 21 mountains (7 large mountains and 14 small mountains), the mountain is U-shaped. The highest mountain is Cua Ong Mountain with 295m high, Nui Ong is 285m high, Mountain Tha La is 198m high and the lowest 63m high is Mount Chua. These four mountains are attached to each other to form a long undulating mountain range that lies north – northeast and south – southwest.
In particular, the Cau mountain range has a shape like 2 saddles, so the locals also call it Yen 1 (Cua Ong Mountain and Nui Ong), Yen 2 (Mount Tha La). The Nui Cau region has high reserves, so the natural herbs are abundant and there are also precious woods such as: knockers, spokes, christmas incense, mausoleum and many other herbs … home to many species of animals. such as: deer, mussel, wild boar,….
To the south – southwest at the foot of the mountain, we see a rushing waterfall flowing through the rocks and pouring into a circular pool with a depth of about 3m, with a diameter of fifty meters. Deposition of water depletes the power of the stream to flow and ceaselessly rumbling sounds… named Than Tho Lake.
On the top of the mountain, there is also a temple worshiping “Cau Bay” and many rocks forming extremely attractive images. At the foot of the mountain, there is Thai Son pagoda built by monk Thich Dat Pham (title: Dinh Van Tren) (Master Sau) (Master Sau) built in 1988, with a total area of ​​over 5 hectares, including items such as: Tam Quan gate, Dai temple. The 36m high tower has 9 floors, the statue of The Yin is 12m high, the main hall, the jade palace are also built in the style of the ancient architecture, inside the main hall of the abbot and the Buddhist monks often knocked on the chanting temple. This area enhances the spiritual spirituality of visitors from all over the world … 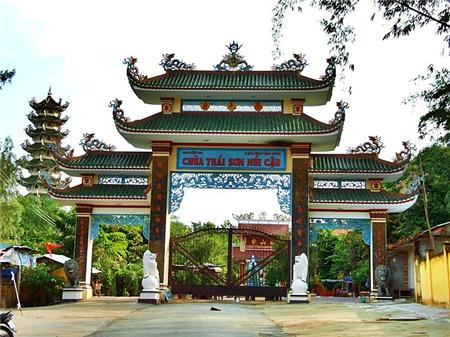 During the resistance war, this peaceful mountainous region protected the Venerable Dat Pham and his comrades to work in the network. Perhaps this is part of many other spiritual reasons that made the Venerable Master determined to build Thai Son pagoda on the land of the old mountains.
Reservoir is an irrigation works with over 27000 hectares wide area and 1.5 billion m 3 of water for agriculture. Construction managers, engineers and irrigation workers have invested wisdom, energy and determination to achieve the goal of the lake capable of irrigating more than hundreds of thousands of hectares of farmland and crops of a large area from Tay Ninh to Binh Duong through Long An to Ho Chi Minh city.
Nui Cau – Dau Tieng Lake is a scenic combination River – Water – Mountain – Hill is truly a beautiful landscape, a primitive, post-mountain terrain creates a gentle and peaceful feature of the lake-bed stream. In the cool, next to a majestic screen of the natural mountain forest as a protective god protecting the peace for everyone.
In particular, this mountainous area is also protective forest – This lake-bed water is also irrigation water for flood discharge in riverside areas. Nui Cau – Dau Tieng Lake is a scenic – tourist attraction is a famous place that many domestic and foreign tourists have come here with their admiration and excitement.
Nui Cau was a revolutionary base in the resistance war
Climb up the Mountain at an altitude of about 284.6m, we see the surrounding heaven and earth appearing in front of our eyes, far away is the busy town of Dau Tieng, hustle and bustle. In particular, since the separation of Dau Tieng was reestablished, the district quickly went into urban embellishment to deserve the stature of a district with a long history of anti-enemies that President Ho Chi Minh praised in his will. Tet of 1966:

The period of resistance against the French. Nui Cau has become a revolutionary operation base. This place was called Dinh Thanh the base to distinguish Dinh Thanh temporarily occupied at that time.
In May 1951, implementing the policy of the Military Region Party Committee, the Eastern Inter-zone, the rubber area comprising 22 villages merged into Duong Minh Chau district, Tay Ninh province. Duong Minh Chau District Committee appointed Party Committee, Branch of Dau Tieng town including 5 comrades, comrade Tran Van Lac in charge of hamlet 4 Bau Sinh to station on Nui Cau.
By 1961, at that time guerrillas operated almost without any weapons in hand, only the first Village 22 had a platoon with knives and machetes doing security and order work and was also the first village. received 3 cool mousse. Since then, the armed team was called the guerrilla team, the civil service team, established 8 working groups at the location of operations at Nui Cau, codenamed “C” (later changed to B): B21, B26 , B28. The first B with 1 gun was brought back by comrade Sau Bi.
By 1967, operation Junction City of the US ended, Nui Cau turned to their strength, they occupied and placed a post for the battalion of the 173rd Brigade to keep from spring through early summer.
Through the battle of Mau Than 1968, by all means, contact to re-establish the base base. District Party Committee, district team, police formed a cluster of bases but operated dispersedly to avoid damage to the whole cluster. Base at least three turns left to move back from Nui Cau to the area at the beginning of block 69. Then back to Nui Cau. Nui Cau was a very favorable terrain, so the Revolution was determined to keep it as a base to support the development of the movement, in order to contribute to the overall victory.
Preservation of scenic mountains and lake bed is to preserve and promote historical value, preserve a natural landscape, ideal ecological environment. Currently, Nui Cau is a protection forest, so the Forest Protection Department – Dau Tieng Forest Protection Department is protecting it strictly. Thai Son pagoda area has the abbot Dat Pham, along with a number of Buddhists early evening prayers for everyone. Particularly, the landscape of Long Ho is also managed by the Water Management Department of the Irrigation Exploitation Company to monitor the rising and falling water, but take corrective measures to stabilize the efficiency and safety of the lake.
Rate this post